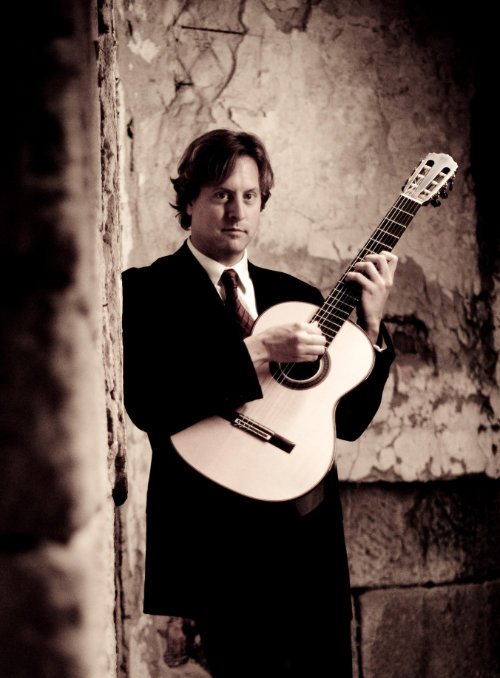 Vieaux has a strong presence on radio and streaming services. In 2022, his long-awaited “Bach Volume 2: Works for Violin” was released in April on Azica Records to critical acclaim. “Shining Night” a CD from Avie Records featuring his duo with violinist Anne Akiko Meyers, was released in May.  His Sony Classical recording of Michael Fine’s “Concierto del Luna” for flute and guitar (with flutist Alexa Still) is yet another Spring release. Vieaux recently recorded Pat Metheny’s “Four Paths of Light”, a solo work dedicated to him by Pat for Metheny’s 2021 album “Road To The Sun”.

Vieaux’s multiple appearances over the years with...

As a teacher, Vieaux co-founded the guitar department at the Curtis Institute of Music in 2011 (with David Starobin), and has taught at the Cleveland Institute of Music for 25 years. Jason’s online Guitar School for Artistworks Inc. has hundreds of subscribers from all over the world. He plays a guitar by Gernot Wagner, 2013, made in Frankfurt.

perhaps the most precise and soulful classical guitarist of his generation.NPR

Vieaux ... makes everything look and sound easy. An uncommonly relaxed figure onstage, he seems immersed entirely in the moment. Every note comes out fully formed, but nothing he does feels premeditated, and the music, just a little understated, speaks eloquently for itself.Washington Post

Vieaux’s new recording Play is not only like pop iTunes, it is part of the revitalized interest in the classical guitar.The Huffington Post

Vieaux [was] nimble-fingered in a Vivaldi Concerto that was remarkable for its variety of colors.Boston Globe

The writing for the solo instrument was fantastic— lyrical, virtuosic, tender, and passionate all at once. Vieaux proved to be an ideal soloist. [Leshnoff Concerto, Nashville Symphony]American Record Guide

Vieaux showed why he is among the most talented guitarists of his generation, a player whose effortless technique and fluidity gave the concerto a singing voice.Tampa Tribune

Vieaux was first-class. One movement of Ponce’s Concierto del sur made me want to hear more of his work, such was the range of sounds he drew from his instrument.New Zealand Herald

…among the elite of today’s classical guitarists.Gramophone